Nigeria is a country with about 371 Ethic groups with Igbo, Hausa, and Yoruba being the most dominant. In this article, we will be looking at some of the most wicked tribe in Nigeria.

Despite the cultural diversity of Nigeria which is the existence of many tribes and different ethnic groups. The people of Nigeria are able to live together and communicate with each other by the use of the official language (English).

Tracing back when Nigeria was under the great people of Britain, Nigerians practiced different religions and because of the diversity in ethnicity, there was always dispute amongst people which resulted to fight and killings of one another.

Our heroes and heroines fought so hard to ensure Nigeria is a better country by laying down their lives.

The emergence of Nigeria as an independent nation was believed to foster unity, peace, and progress in the country. However, the diversity in culture, religion, and beliefs is causing more disunity than unity.

Presently, the Biafra group (Igbos) are fighting for their freedom to disassociate from Nigeria and form their own independent nation.

The Hausa people on the other hand are terrorism the Tiv people and causing unrest in Benue State villages and other areas in Nassarawa.

And again, there are so many other tribes in Nigeria that are considered wicked and dangerous. They are a group of people you should always avoid having disputes with even if you are innocent.

Most Wicked Tribe In Nigeria 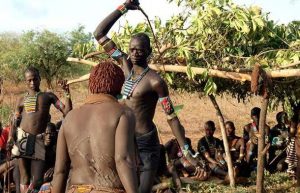 Wickedness is simply the act or the quality of being evil or morally wrong. These tribes below are known to be the most wicked tribes in Nigeria.

The Fulani people are not just wicked but a very stubborn set of people with a nomadic lifestyle that don’t care to obey government rules and regulations.

The people of Fulani are cattle rearers and they spend all their lives roaming around the bush with their cattle to search for pasture.

They can be found in the northern part of the country such as Sokoto, Gombe, Adamawa, Yobe, and other states such as Benue State.

With a nomadic and hostile lifestyle, the Fulani people are the most dangerous tribes in Nigeria.

Every day in Nigeria, we read in the newspapers and TV stations of indiscriminate killings by the Fulani people going on which results to unrest.

The Fulanis love their cattle more than human beings. It is only a Fulani man that will be willing to kill you just because of a cow or even if it means preserving the life of a cow.

The Tiv people have suffered so much at the hands of the Fulani people, frequent attacks have witnessed more Tiv people lost their lives in cold blood by the Fulanis.

Lastly, the predominant religion of the Fulani people is Islam, there are very religious and not all of them are violet.

The Ogoni tribe is another violet tribe known for killings, kidnapping, and all other forms of violence in the country.

The Ogonis are a people in the Rivers southeast senatorial district of Rivers State, in the Niger Delta region of southern Nigeria

If you find yourself in the land of Ogoni you better behave yourself and avoid having problems with them.

The people of Ogoni are very greedy and can kill you because of just N200 Naira, they believe in the superiority of taking vengeance rather than forgiveness.

Historically, the people of Ogboni have been guilty of human rights violations and the government has placed an eagle eye on them to restore peace and unity in their land.

The Hausa people could be friendly and hospitable but that does not deny the fact that they could be dangerous and wicked if they choose to be.

Hausa people belives in vengeance over forgiveness and even when they forgive, they don’t forget and will haunt you down if you cross their boundaries.

If you want to live peacefully with a Hausa man, the first thing you should do is to understand and speak his language, secondary, avoid his wife or daughter at all cost.

Conclusively, the Hausa people are peacemakers but If you provoke a Hausa man doom will await you.

The Edo or Benin people are an Edoid ethnic group primarily found in Edo State, Southern part of Nigeria. They speak the Edo language and are the descendants of Igodomigodo, which evolved to become the Benin Empire

Edo state is the capital for Yahoo, cultism, killings, and violence in Nigeria. They are a people of greed and can kill you to get whatever they want.

The people of Edo are known to be one of the most wicked tribes in Nigeria.

They are also found in other Nigerian states like Ondo, Edo, and Akwa Ibom. Many are found as migrant fishermen in camps as far west as Sierra Leone and as far east as Gabon.

The Ijaw tribal people are seen as one of the most wicked tribes in Nigeria because of the high rate of terrorism and kidnapping.

The Esan people are an ethnic group of southern Nigeria who speaks the Esan language.

They are traditionally known to be agriculturalists, trade-medical practitioners, mercenary warriors, and hunters.

It is believed that these people are mostly witches and cultists. They are seen as very wicked and are always at war with one another using diabolic means to cause the downfall of each other.

The Igbo people are very smart, hardworking, and successful. They are business-oriented people and will sacrifice everything just to make money.

Second, Igbos are considered the richest tribe in Nigeria, their wealth comes from hard work and not embezzlement of government properties.

However, many people hate the Igbos for the Indigenous People Of Biafra (IPOB) Movement they keep pushing for; through their Pioneer  Nnamdi Kanu.

Just recently, the IPOB movement once led to the massacre and displacement of millions of Igbos from their homes during the Nigeria-Biafra civil war.

Their love for money also makes them vulnerable to money rituals, and because of that, they are considered a dangerous tribe.

But Nevertheless, the Igbo men are very kind and loving, they know how to treat a lady write and are very committed to their marriages.

The Yoruba people occupy the southwestern geopolitical zone and are one of the major ethnic groups in Nigeria.

The majority of Nigerian leaders are of the Yoruba tribe and you can tell how badly they have ruled Nigeria. Indiscriminate killings, rituals, and kidnapping is the major talk in the land of the Yorubas.

In that regard, they are considered dangerous and the most wicked tribe in Nigeria.

But amidst all these, the Yoruba people are loving and are one of the best tribe to marry in Nigeria.

Conclusion: Most Wicked Tribe in Nigeria

In conclusion, The Fulani people tops the list of the most wicked tribe in Nigeria, they are very violet dangerous. Other wicked tribes include Hausa, Esan, Ijaw, Edo, Igbo, and Egoni.

Lastly, If you know any other wicked tribe in Nigeria that you feel should make the list, kindly comment below.