If you are a Yoruba boy/girl tracing the history of the Yoruba people, you could be asking questions like; Where did Yoruba originate from? and looking for answers to your research questions. This article will provide first-class information pertaining to Yoruba history and where the Yoruba people originate from to occupy a large portion of the population of Nigerians.

Most of the artworks were made to honour the gods and ancestors and since there are more than 401 known gods to the Yoruba there is much sculpture and artwork made.

History of The Yoruba People 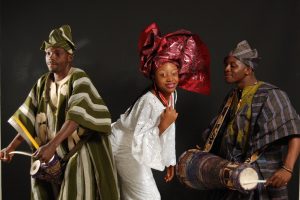 The Yorubas originated from Ile-Ife, arose and became quite popular by their trading with the Portuguese, which gave them a large supply of guns. However, they were unable to push back the Fulani who invaded them and pushed much of the Yoruba to the south.

In the late 1800s, the Yorubas formed a treaty with the Fulani and in 1901 they were colonised by the British. Because of their enmity with the Fulani who are the great Islamic evangelists, most of the Yoruba people do not hold to Islam but instead worship many of the gods and spirits that the Yoruba hold to.

Economically, Yoruba people primarily engage in agriculture, with about 15% of the people employed as merchants or artists and craftsman.

One of the features that make Yoruba people unique is their tendency to form into large city groups instead of small village groups. The Yorubas are today one of the three main ethnic groups that make up Nigeria. They can also be found in neighbouring countries.

Yoruba people are a large ethnolinguistic group or ethnic nation in Africa, and the majority of them speak the Yoruba language. The Yoruba constitute approximately 35 per cent of Nigeria’s total population and around 40 million individuals throughout the region of West Africa.

While the majority of the Yoruba live in western Nigeria, there are also substantial indigenous Yoruba communities in Benin, Ghana, Togo and the Caribbean.

A significant percentage of Africans enslaved during the TransAtlantic Slave Trade in the Americas managed to maintain the Yoruba spiritual religion known as Aborisha. Indeed, the initiation and practice of Aborisha spiritual religion offer a route to all people of African descent, who were victims of the slave trade in the Americas or the Caribbean, to make claim to Yoruba heritage.

It is very rare to find a Yoruba family that does not have Christians, Muslims and adherents of the more traditional and ancient tribal faiths in their ranks. The gradual migration of our forefathers from the Middle East, North Africa and north-eastern Nigeria to our own homelands in the south-west are why the Yoruba, together with the northerners of what is presently known as northern Nigeria and are generally known as the ”Sudanese Nigerians” whilst the Nigerians from the rest of southern Nigeria, which comprise of the Igbo race and the people of the south-south are generally known as the ”Bantu Nigerians”.

The Yorubas are the main ethnic group in the states of Ekiti, Lagos, Ogun, Ondo, Osun, and Oyo, which are subdivisions of Nigeria; they also constitute a sizable proportion of Kwara and Kogi States as well as Edo State.

Traditionally, the Yorubas organised themselves into networks of related villages, towns and kingdoms; with most of them headed by an Oba (King) or Baale (a nobleman or mayor). Major Yoruba cities and towns include Ile-Ife, Ibadan, Lagos, Ijebu Ode, Abeokuta, Akure, Ilorin, Ijebu-Igbo, Ogbomosho, Ondo, Badagry, Ado-Ekiti, Osogbo, Ilesa, Oyo, Owo, Kabba, Offa, Ilesa, Ilobu, Ede etc. There are other Yoruba cities and towns such as Ketu, Sabe, Dassa and others in the Republic of Benin.

There are other towns and cities with historical affiliation with the Yoruba people because they share one or more similarities together. Some of these cities and towns are Benin city, Warri, Auchi, Okene etc.

In conclusion, I hope this article has provided vast knowledge on the history of Yoruba People, their origin, culture, family and religion. If you have any contributions to make as regards this post kindly hit the comment box. Thanks