The people of Urhobo are one of the most predominant tribes in Delta State. They are known to have very scary marriage rite costumes and so; in this guide, we will be looking at Urhobo Traditional Marriage list requirements, bride price, and customs

Urhobo is geographically located within the heartland region of the Niger Delta area of Nigeria and has an estimated population of 4 million.

The People of Uhobo are surrounded by other tribes such as Ijaw, Itsekeri, and Benin people geographically.

Due to their close geographical location and historical connections over the centuries, there have been intermarriage relationships amongst themselves.

Urhobo traditional marriage is very unique and is carried out to ascertain their culture and traditions. Their marriage custom and traditions make it scary discouraging for non-Urhobo people who may have intentions of marrying in Urhobo land.

One vital thing to know about Urhobo marriage is that; it goes beyond the couples directly involved; it embraces the extended families of the spouses.

One will not argue that Urhobo marriage is a marriage of two families. This is so because the families pilot the affairs of the marriage and play very central roles in ensuring the success of the marital relationships from the time of courtship through the marriage negotiations to the contracting of the marriage.

One shocking thing to note again is that divorce in Urhobo land is rare; Urhobo traditional marriage endures beyond the life of the husband. In fact, it is the wife’s life span.

For example; if the husband of the wife dies, the wife is passed on to the elder or younger brother of the husband notwithstanding if the person already has a wife or not.

To foster continuity of marriage; the families are also expected to intervene or mediate when there
are problems or conflicts between husband and wife, and when the marriage relationship is threatened in any way – this is in total contrast to the western marriage system where family intervention is seen as
interference. 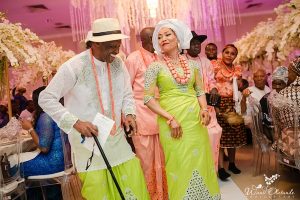 Forms of Marriage in Urhobo

Urhobo has a distinctive marriage process. Below are some forms of Marriage practised by the people of Urhobo.

This form of marriage practiced by Urhobo people allows the parents of either the boy or the girl to propose marriage on behalf of their children at an early age.

Just imagine your parents proposing marriage for you in this 21st century where everybody has freedom of choice and most especially; who they want to marry.

This is usually done when either of the parents sees a boy or girl with satisfactory behaviors that are pleasing to them.

In this form of marriage, love develops only after the couple had been officially married and starts living together.

This is another form of marriage practiced widely by the Urhobos. A man and woman are bound together without the payment of the bride price. However, they are allowed to enjoy some marital rites whether they are living together or not.

Furthermore; the couple may enjoy all the benefits of marital rights but is customarily limited as a legal couple and thus could not play some expected roles of an in-law.

This form of marriage is practised when a Man who is staying out of the country but wants to marry an Urhobo lady in Nigeria.

In this situation; the man will request his parents to look for a girl and marry him without any formal contact with the real couple as both of them may not have seen or known each other previously.

This form of marriage is traditionally celebrated among the Urhobos and during the marriage program; the man’s brother or any trusted friend would present himself as the husband of the bride.

After the marriage ceremony, the wife is required to spend time with his absent husband’s family before she would be dispatched to her overseas husband which is usually a 50-50 adventure.

Though this form of marriage is sometimes risky because if either the wife or husband is not satisfied after meeting each other; the marriage will be cancelled immediately.

In this form of Marriage; a boy meets a girl of his choice which the parents may not know of initially but which they would later be informed of.

After that, both families will be involved officially and if they agree, plans are made to solidify it with traditional rites before they go to either church or the Registry for the legal marriage.

In conclusion, this form of marriage is safer because it gives room for the man or woman to choose who they want to marry with little involvement of the parents. 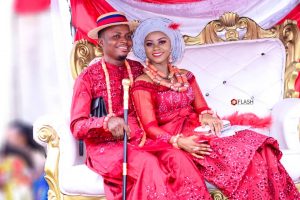 Both families usually meet on the stipulated day for marriage rites after the formal introduction.

First, the bride’s family will welcome them, drinks and kola nuts supported with some money will be offered to the visiting family, as is customary in Urhobo tradition.

After that, A spokesman for the bride’s family will make the presentation of the drinks and kola nuts with the money to the visiting family.

The visitor’s spokesman will accept the presentation on behalf of the groom’s family. After this initial customary entertainment, the visitors are asked the purpose of their visit.

The Husband people would inform the bride’s family that they have come to marry their daughter for their son, who may or may not be present at that meeting. If the bride’s family accepts this explanation, they would go through a process of the identification of the bride they wish to marry.

The visitors would be told that the family has many daughters; as such, its members do not know which of their daughters their son would like to marry. The bride’s family would then bring out a girl who is not the bride, and parade this girl in front of the groom’s family.

The groom would reject each girl saying that she was not the one he wants. This formality would be repeated about three times.

Each time a girl is paraded and rejected, the groom’s family would be asked to pay the rejected girl some money. Finally, the bride is presented to the groom to confirm the true identity of his chosen bride.

Once this process is concluded, the bride’s consent would then be obtained. That is, she will be asked if she is willing to marry the groom.

In some wealthy families, the traditional rulers could be also involved

The family of bride can only receive the dowry if she consents to marry the groom. This process is only a formality on the day because in most cases, the dowry amount and all arrangements would normally have been agreed upon. That is, both families would have reached some understanding.

It is worth mentioning here that, it is customary that before the stage of pouring the libation is reached, the potential husband and his family would pay several visits to the family of the bride-to-be.

The purpose of these visits is to negotiate and to meet certain pre-marriage requirements stipulated by the bride’s family.

Upon acceptance of the dowry, the bride’s father pours a libation. The libation is poured using a native gin (ogogoro) or may be represented by Gordon gin and kola nuts.

After that, the bride’s father offers a prayer/blessing for the couple. At this point, the bride sits on her husband’s lap.

The blessed drink is handed to the husband who drinks first; he then hands it to his wife to drink. The wife would drink and pass it back to her husband to finish, as a sign of respect.

After the wife shares a drink, they are declared husband and wife. Both family members present at the ceremony would then shower the couple with money and gifts and advice the new couple on how to live peacefully.

She will hug all her friends, and her siblings and give them little gifts to remember her by. The bride is escorted to her husband’s house, on the way to his house; certain people will stop them on the way and ask the groom to pay some money so that he can take his bride home.

Next is “Esuo” – This term describes the final stage of a full marriage according to Urhobo custom. It denotes the completion of all antecedent requirements necessary on the part of the husband.

It is the escorting of the bride by her family with her properties, and goodwill, to the head of the husband’s family, and handing over until the death of the bride as wife to the groom’s family.

A special ceremony is usually performed to invoke the husband’s ancestors to also receive her and bind her over in fidelity and loyalty to their son – the husband.

The entire women receive the bride, eat, and dance in the special room prepared for her till the dawn of the following day. 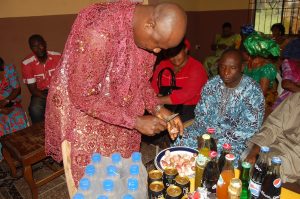 One bottle of hot drink usually serves to state the mission of coming.

Another bottle of hot drink with ₦500for commencement of marriage formalities

Acceptance of the marriage proposals also goes with its own requirements and these includes but are not limited to the following:

Then lastly, the groom and his family members also carter for the entertainments of the guests, Arranging with the bride’s mother for the serving of a native soup called “ogwo’figbo” and to present gifts to the guests at the wedding.

Below are some adorable Urhobo traditional attire. 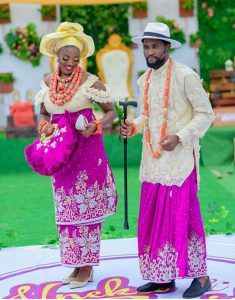 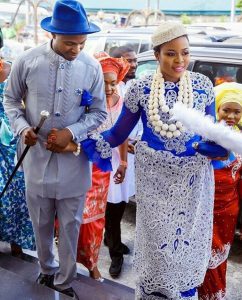 Conclusively, Urhobo people have one of the weirdest but unique marriage customs in Nigeria. I hope this article has explained well enough; Urhobo traditional marriage list, rites, and forms of marriage in Urhobo land.